With Love on St Patrick's Day

It's not often I write such a personal post, but today seemed like a good day to do it.  Today is St Patrick's day and while to many this means, shamrock, leprechauns and guiness to my family it means something slightly different. 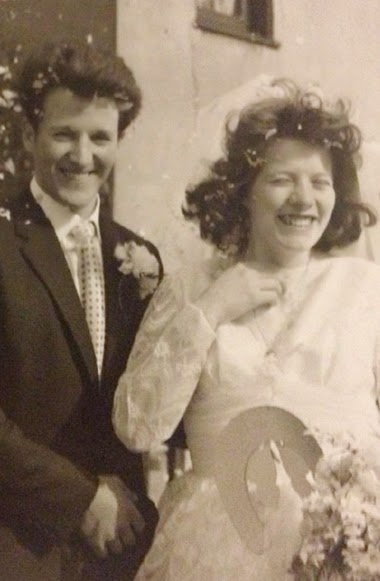 My Grandparents, who happen to be Irish, got married on St Patrick's Day 52 years ago.  I am so proud of them both, in their 52 years they have been through a lot that most families couldn't even imagine.  But they have come through it all and been a huge influence in my life and have supported me through so much (including University and many teenage strops) and I felt it was about time I dedicated a post to them.


My Nan and Grandad came to England when they were teenagers from different counties in Ireland, when racial slurs smudged across pub doors were the norm and being Irish meant they were little below being a dog.  My Grandad recently told me, that most pubs had signs outside them which declared "no black's, no dog's, no Irish".  Which really shocked me, it's hard to believe there was a time that this would have been tolerated.

My Grandad then moved on to tell me his story of how he arrived in England and how he met my Nan...

"I was 16 when I came across on the boat to England, via Wales.  A lady in my village helped my buy my passage and send me on my way as my father was already working in England and my mother died when I was a toddler."

"I left Ireland with no shoes and a small paper bag with my possessions inside.  On my way across it rained and the bag fell to pieces, meaning I could only pick up what I could carry with me, but I didn't have a lot anyway."

"I then walked to Wolverhampton with no shoes from Wales, to a place where my older brother John was staying.  He had left when I arrived, but he had left me a room, a job and a pair of boots.  He had also paid for my next months lodgings."

My Grandad then went on to tell me that he stayed there until he had earned enough money to make the journey down to London, where he met my Nan.


I don't think my Grandad had been in England for even a year when he met my Nan, but he managed to find a pub in London that the Irish were welcome and that probably had a lot to do with the fact that my Nan was the landlady.

I believe the pub was in Tottenham and by this time, my Nan's two sisters and most of my Grandad's family were all also living in London or nearby.  Not long after they met, they were married (I was told because you got a tax rebate that year if you did - who says romance is dead?) and expecting my dad.

This is when they moved to Essex, where they still live today. They were only 19 and 20 at the time and bought their new house for less than £50 (does someone have a time machine?).

My Grandad has been an absolute trooper though, he has worked every day of his life, since he was about 10 years old (hoofing horses), on farms or building sites driving JCB tractors and is begrudgingly going to retire this summer.


He has achieved so much since arriving here too.  He has learned to read and write, he has had a successful career and a beautiful marriage.  He goes to church every Sunday with my nan and regularly still sees his friends at the working men's clubs on the weekend.  Which is where we held their 50th wedding anniversary a few years ago.


My nan on the other hand hasn't told me as much about her life before she came to England and when she arrived though.  I know she spent some time in Boston with her sister before arriving and that they used to knit to make money when they were children.

My nan's family were a little more wealthy than my Grandad's though, they lived on a working farm near the sea and their family was huge.  She has told me a few stories about her and her sister Mary horse riding and a particular argument that they had, which resulted in the horse bolting while poor Mary was still in the saddle.   But I realise I probably need to do a bit more coaxing, to hear my Nan's story.

The house the purchased back in the 60's is the house they still live in to this day.  It's where I spent a lot of my time as a child learning how to ride my bike, falling over on my new roller skates and eating sweets that my mum said I wasn't allowed.  It was a great childhood and my Grandparents are a true inspiration.

I wish them many more years of health and happiness.  Congratulations Nan and Grandad.

Email ThisBlogThis!Share to TwitterShare to FacebookShare to Pinterest
Labels: family