Days at the Seaside

Most of you who read my blog regularly will know that I have a nephew who recently turned two, and he definitely knows his own mind now.  So what do you do with a two year old for the day?  Well being an overgrown child myself I have lots of ideas, but my favourite one is the seaside.  I Am a  firm believer in spoiling children with your time and not your money.  Although I like to treat him to things every now and again (who doesn't) I mostly like to make memories with him, as these will last a lifetime.

So last weekend when it was sunny we pakced a bag and headed for the beach, a place I was familiar with after spending every weekend there as a child.

So me and Teddie made our way to Southend-on-sea and it was freezing - but we jumped on a train along the pier and had a look around.

Southend Pier is one of the longest in the UK and has been through its fair share of hardships over the years with a few fires keeping it on its toes.  The pier has been rebuilt in the last few years and is still running daily to take people to the end of the pier, where the life boats are kept and back again.

The pier is somewhere I love and have lots of memories of going to growing up, I used to wave at all the people walking along when I was a little girl and even walked my dollies in their prams along their too a few times with my nan who lived there.

Now I am older, I hope Teddie will have lots of things like this to remember when he is older too.

Now I am older I encourage Teddie to look out the window for the people walking along too, so that he can wave to them in the same way that we all used to when we were his age.  He also enjoyed pointing out all the juice to me on the way.  Juice is Ted's word for water... 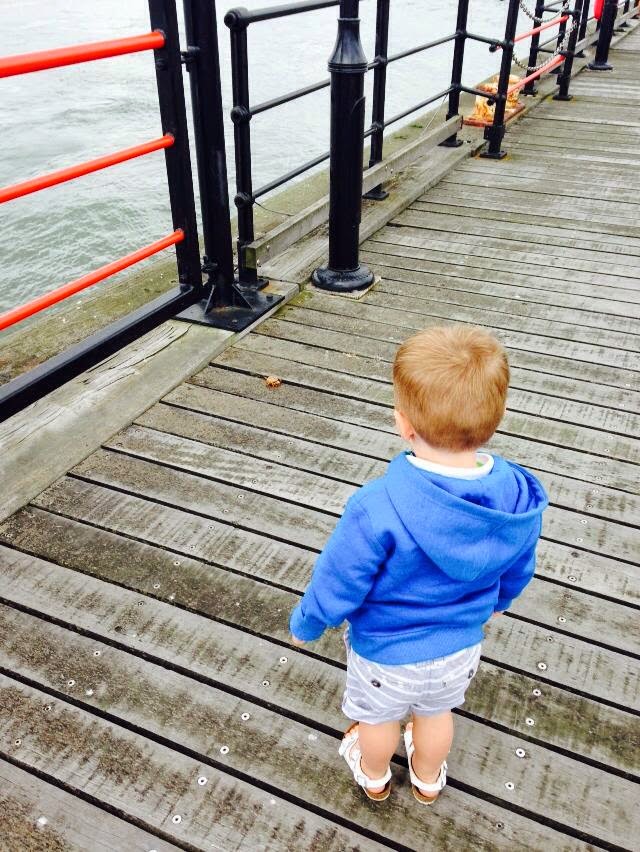 At the end of the pier there is always people fishing, however, on this particular day we found a lovely man who was showing the children the crabs he had caught.  I used to love crabbing when I was a kid and would spend hours hanging over bridges seeing who could catch the most and then throw them all back in again.  Teddie however, wasn't so keen.  In fact this is as close as he was getting to any crab on the pier that day.

After checking out the lifeboats and buying a windmill for Teddie, we went to get a snack before heading back.  Ted's such an old man already, asking for a cup of tea when we got to the cafe - so we stopped for tea and then made our way back to get off the freezing cold pier.

Southend also has its own little amusment park, which I still call Peter Pans Playground, as it was called way back when and on the cliffs had a place you could explore called Never, never land.  But since the cliffs slipped a long time ago now and Never, never land was no more, they changed the name to Adventure Island.  If you want to go for the day you can get wrist bands or if you are just hopping on a few rides you can get some tickets.

As Teddie is a bit too small for most of the rides still, I took him on the oldest ride in the park - the waltz and he loved it.  In fact he tried to stage a protest and not get off the ride, "more Auntie Lauren".   So off we went to get some more tickets and got back on the ride again and again until I was starting to feel a bit sick...

After the tickets ran out, we went to get Ice Cream in our favourite place, Rossi's.  Rossi's has been there since my nan was a little girl, this is where she grew up during the war and actually used to swim to the end of the pier on a daily basis.  So every weekend come rain or shine, we would go get a Rossi's Ice cream - it is the best I have ever tasted and I have tried a lot of ice cream.

After our Ice Creams we made our way back to the car and went home to find mummy.  We had a brilliant day and would recommend it to everyone (especially the ice cream).

What are your top tips for a day at the beach? Comment below and let me know :)