Why I think people aren't missing the point of a #nomakeupselfie

Recently I have noticed the momentum of the #nomakeupselfie growing on Facebook and other social media channels like Instagram and Twitter.  However, with this, I have also noticed the cynics - who have the opinion that people are missing the point of the campaign.

I can honestly say that I don't think that people are missing the point at all.

Sometimes it isn't just about raising money (although it obviously helps when paying for research), but it is about by raising awareness. I think that if this campaign reaches even just one person, who then thinks to check themselves and it saves their life, then it will have more than done its job.

I have also seen a lot of people posting the selfie and saying that they have then gone on to donate - so no I don't think anyone is missing the point of the campaign - because I don't think there was an official aim when it was started.

This campaign has definitely made an impact though, as so many women are nominating each other and the media are picking up on it. Essentially, this is a free campaign for Breast cancer awareness, as the reach is now phenomenal and even if it makes a slight difference, its made one.

There has been one point that was raised during this though, which I think is a point that a lot of people miss when they talk about breast cancer.  This is the fact that it can and does effect men too.  It is also something that although not as common, can effect younger people too.

So before I unveil my #nomakeupselfie, please make sure you are doing these checks every day...

If you need any more information though, check out their website here.

Finally, here is my no makeup selfie 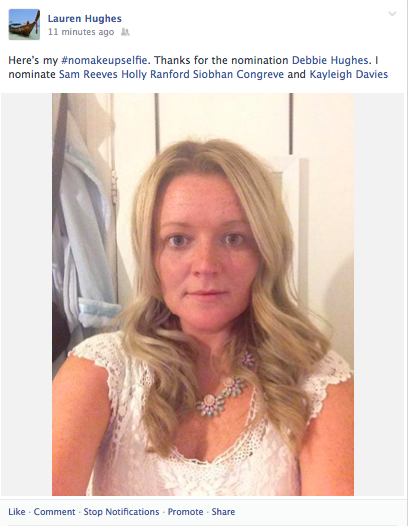 Have you taken part in the campaign too? Send me a link below of your #nomakeupselfie.

Don't forget to donate to the cause too, by texting 70099 you will donate £3 to breast cancer awareness.

Email ThisBlogThis!Share to TwitterShare to FacebookShare to Pinterest
Labels: breast cancer, cosmetics, no make up